Volley[1] is a minor character that briefly appears in Temptation Stairway.

Volley is a spiritual witch-like character that possesses a lavender body. They display a purple archetypal witch hat with the top of the hat shaped like a leafless tree with a magenta square-shaped pattern. They also wear a purple dress-like cloth that correlates with the design of their hat. Their hat and dress both appear to leak purple liquid in small drops. The top half of their face appears to be enveloped in shadow by their hat. They display a slightly frowning mouth and 2 spike-like details on the side of their head, presumably being their ears.

Volley carries five orbs with them, four embedded into their arms, while carrying a green one using levitation. The orbs are colored red, cyan, yellow, blue, and green, respectively.

The differences between the episode's design and concept art are relatively small. In Volley's concept art, they have visible bandages wrapped around their eyes and sport a pair of legs instead of lacking them like in the episode. 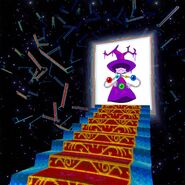 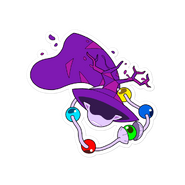