Unnamed is an Ena-like character first appearing on Joel Guerra's Twitter in posted concept art.[2] She currently does not appear in any of the series's episodes.

Her overall appearance is very similar to Ena. She sports smooth white skin and has black hair with a similar design to that of Ena. She wears a white collared T-shirt with black overall straps that are connected to her black skirt. The rim of her skirt has a tattered orange design resembling fire. Her gray hands have orange cuffs and are disconnected from her body with her arms completely absent. Her face has triangular squinted eyes and a toothy grin with large outward-pointing teeth and pink lips.

The initial post revealing Unnamed showed her with a slightly different design, showing her drawn with orange geometric arms along with short white sleeves and her skirt being geometric. She is also drawn alongside an unnamed samurai-esque character, though it is unknown if the two are related in any way.

Unnamed (alongside a samurai-esque character) first appeared in a Tweet by series creator Joel Guerra to show off some characters made for fun "months ago". Unnamed's design received positive reception, leading several fans to make fan art of the character. After noticing the reception, another drawing of Unnamed was posted alongside a comment stating the design was "very experimental".[3]

Replying to a comment asking if the design would be used in the future, Joel stated the design was originally intended to appear in Dream BBQ and he was unsure if it would be used due to the vision of Dream BBQ changing throughout its development.[4]

Likely due to the positive feedback from fans, she has appeared occasionally outside of her initial reveal. She later appeared as an unlockable skin on Joelgc.com for user avatars where she can be obtained through an Easter egg. An art piece featuring her was also posted on Joel Guerra's Twitter on November 28th, 2021.[5] 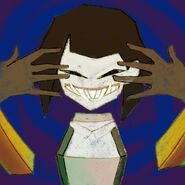