The Shepherd is a minor character that appears in Temptation Stairway. She is seen taking care of the Hourglass Dogs in the Hourglass Meadow.

The Shepherd appears to be feline to an extent. She has a black humanoid body with a skinny neck, legs, and arms. Her head sports a pair of black ears that curve upward like horns. Her two-toned face resembles a mask, having red on her left side and white on her right (with a small section of red on her white side's cheek). The red side sports the outline for her mouth and has an oblong light-yellow cat eye while the white side has a much more detailed eye along with an eyebrow. Her red side and red cheek present on her white side also have angular whiskers. She also sports hair that starts as a brown streak on the top of her head that spreads into two pigtails.

The Shepherd's outfit consists of a brown button-up vest with red buttons, exposing her midriff and a matching long brown skirt tied with a red belt. She also wears brown sandals and holds a shepherd's crook.

The Shepherd appears blunt and exhausted at first, acting aggressive and dismissing what Ena has to say. She seems to hold significance to The Great Runas, insisting they don't give out horoscopes anymore and shouldn't be disturbed by "simpletons". She does seem to warm up in some way, as she's quickly swooned by the Turrón that Ena gives her. After receiving the treat, she gives a Blood ID in return and directions towards the Mannequin Expanse not far ahead before dozing off.

Concept drawings of characters for Temptation Stairway including The Shepherd.

Render of The Shepherd uploaded to Joel G.'s social media, almost 3 months before her debut. 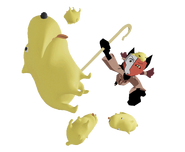 The Shepherd with a trio of Hourglass Dogs.

The Shepherd's 3D model and eye set. Modeled by Utu-Nui.[4]

GIF of The Shepherd with an Hourglass Dog. Posted on Joel G.'s Twitter.[5]

The Shepherd and Ena.

Ena and The Shepherd doing the Turrón dance. 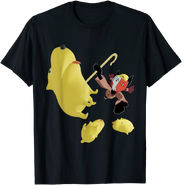 The Shepherd and some Hourglass Dogs on a shirt. 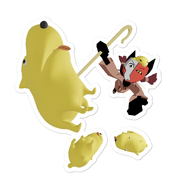 The Shepherd and Hourglass Dogs sticker. 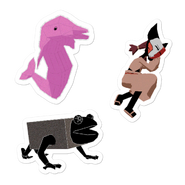