Our Great Runas
The famous entity (by Ena)

The Great Runas is a well-known entity. Its first mention was made in Temptation Stairway. The Great Runas is never outright seen, but its residence is full of landscapes and code, seemingly larger on the inside than it looks.

The Great Runas is implied to be a god-like figure in the ENA universe, though its true appearance is never seen. Moony comments on Runas's appearance, stating that "Runas doesn't look all that handsome in person", implying that she was able to see Runas in order to make her wish in Temptation Stairway.

Instead of through a physical appearance, The Great Runas's residence is shown as a form of transportation. While parading through the Overworld, it rides atop a large gray structure shaped like a boat with two legs. Decorating the structure are large, thorny vines sprouting purple roses. Mannequins can be seen climbing and falling off of the structure, attempting to reach The Great Runas itself.

The entrance to The Great Runas's residence appears as a large arch, similar in shape to a door. The outside of the arch contains jagged points. The space underneath the arch has an orange wall inside it. The face on the wall has a design of a pair of black, empty eyes with tears streaming down it. While parading, the arch also wears a black cape with a starry texture. In the Dead God Graveyard, the arch emits a faint blue glow while its transportation device and cape are absent.

It is very likely that The Great Runas took inspiration from one of the more worshipped figures in Peru, known as El Señor de los Milagros[2]. It is a painting of Christ who survived an earthquake in Lima, Peru in 1655, which is said to perform miracles (wishes) to those who reach to him. During October, believers in the millions gather on one of the most important and massive processions in the Christian world[3] as he is taken out through Lima streets on a pedestal that looks like Runas's, decorated with flowers and purple motifs. El Señor de los Milagros is represented as a crying figure, which matches the representation of Runas as a crying pair of eyes on a wall. Also of note, Turrón de Doña Pepa is mainly sold during this celebration in his honor as it is a food with religious significance. 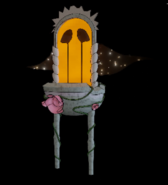 Concept drawings of characters for Temptation Stairway including The Great Runas's residence. 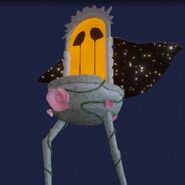 Cover featuring The Great Runas's residence. Used for the cover of GOD RACE on METAROOM's SoundCloud. 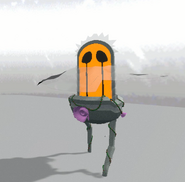 A back view of The Great Runas's residence while it walks around the Overworld. 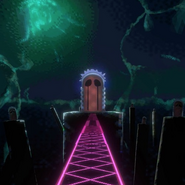 A closer look at The Great Runas's door as it appears in the Dead God Graveyard. 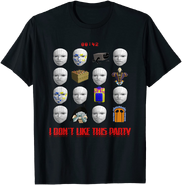 The Great Runas's door on a shirt. 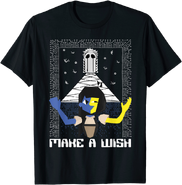 "MAKE A WISH" shirt with Runas's door in the back.