Robert is a minor character that appears in Extinction Party.

Robert appears to be encased in a floating UFO above the grounds of the Maze. Upon interaction, they take on a masculine figure with a blue long-sleeved shirt, blue pants, a belt, and a plain blue tie on their head and glasses. They also don a stereotypical elder-man hairstyle with hair only near the ears. 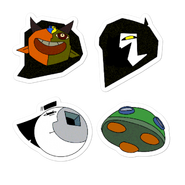