GOD RACE by METAROOM
The Overworld is a location appearing in every episode of the first season of the ENA series.

The location seems to be the main setting for the series and also where the main character Ena resides. The Overworld also has different appearances ranging across the first three ENA shorts:

Concept art of the Overworld in the Auction Day credits.

The Overworld image used for the background of Joelgc.com. 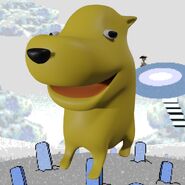 Joel Guerra's current YouTube icon, a render of an Hourglass Dog in the Overworld.
Community content is available under CC-BY-SA unless otherwise noted.
Advertisement