Merci is a minor character that appears in Extinction Party.

Merci is a mime-like being mostly resembling a human. She wears a black and white striped shirt with long dark gray sleeves, dark gray pants, black boots, and a black beret. She also dons a mask with three red dots and a smiling face with a red mouth, which can either resemble a smile or lips. Over her hands are two white hand puppets with wedge-shaped eyes, which can shift to an angry expression, and diamond-shaped mouths, which are shown on one occasion to grow triangle-shaped teeth when angry. She also carries a long dark red pole over her shoulders.

Merci has quite the aggressive personality. She seems to frequently swear in Korean and was shown stomping her feet when she seemed frustrated. However, there also may be an endearing side to her, as she sounded pleasantly surprised when she met Ena again in the Maze. Her aggressive tone while giving Ena advice to run away might be her way of showing worry for Ena. 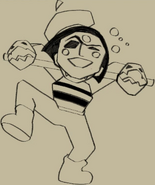 Twitch stream sketch of a Merci sticker, showing her drunk. Notably, a bit of her face underneath her mask can be seen.