Gabo is a minor character that appears in Temptation Stairway.

Gabo is an adult humanoid with a green afro who wears a pink ballerina-like outfit with a pink tutu and pink leggings. They carry a plate in their left hand, of which Mariya is placed upon. They have black, socket-like eyes, as well as a brown beard and eyebrows.

Concept drawings of characters for Temptation Stairway including Gabo. 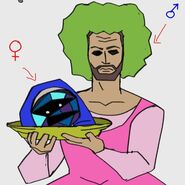 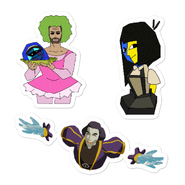