Dream BBQ is an upcoming episode and interactive video game in the ENA series. It is considered the beginning of a new season of the series.

The title ENA - Dream BBQ was first shown on Joel Guerra's Patreon on March 8th. Later, on March 25th, the teaser and first announcement of Dream BBQ were posted publicly on Joel G.'s YouTube and Instagram accounts. The same day, a Tweet on Joel Guerra's Twitter stated he was looking for new voice actors for future projects, alluding to new voice casting in the short.[1]

On May 3rd, Joel had stated he had contracted COVID-19 from the ongoing pandemic, temporarily halting/slowing production of the episode.[2] However, ten days later, another Twitter post stated he was feeling much better and production had continued.[3]

On May 26th and June 15th respectively, concept art of two new characters were revealed. The first gave the front view of the Ena set to appear in Dream BBQ,[4] who was previously only seen from the back in the episode's teaser. The second was a character named Taski Maiden.[5]

On the post revealing Taski Maiden, Joel stated that he had drawn many character designs, stating there would be "more than 20 characters", already doubling the 10 new characters debuting in Temptation Stairway. On July 13th, he followed the previous statement by saying there would be "more than 50".[6] It is currently unknown if this is referring to the entirety of Season 2 or simply Dream BBQ alone. He also confirmed that Dream BBQ would be longer than Temptation Stairway.[7] Seven days after making the "more than 50" statement, some concept art for Season 2 Ena was shown.[8]

On August 24th, a trailer was announced to be released for the project, also stating "an important announcement" to go along with it. A teaser logo for the episode designed by Brian Zavala (Mizu_wolf) was also shown.[9] On September 14th, another teaser was posted that showed two Ena-like figures, both with previously unseen color combinations.[10]

On September 22nd, the aforementioned trailer released, revealing that Dream BBQ would be an interactive game. It was also clarified later on that it would be an episode as well just like Auction Day, Extinction Party, and Temptation Stairway. The trailer revealed that the player plays as Ena, exploring uncanny worlds and meeting new characters. The trailer also announced available pre-orders for upcoming Ena plushies on Joelgc.com. Gabe Velez, the voice actor for Season 1 Ena's masculine voice, revealed that the game will feature a new voice cast, and as such him and Lizzie Freeman will not reprise their previous roles.[11]

On October 9th, another piece of concept art was posted on Joel Guerra's Twitter and Instagram. This piece showed Ena and an unnamed character that previously appeared at the end of the Dream BBQ game trailer.[12] On October 18th, a short GIF of Season 2 Ena performing a pose (also previously seen in the game trailer) was posted.[13] On Halloween, four new characters were revealed on Joel's Instagram.[14]

On November 11th, alongside the reveal of an alternate form for the Ena appearing in Dream BBQ, a short explanation on the game's/episode's uncanniness was given:

This shows that Dream BBQ will mostly be centered around the theming of nightmares and also shows that the idea of such a project was thought of even before the release of Temptation Stairway.[15]

On December 14th, a music preview was released on YouTube featuring music by METAROOM in a song known as "The Purge Event". This was also released alongside art featuring an unknown character and Ena appearing in her currently unnamed alternate form.

On December 30th, an art piece was posted alongside an announced release for Dream BBQ in “the murky depths of 2022” (possibly meaning a release in late 2022).[16] In a now deleted Tweet, it was also joked that Dream BBQ would be immediately cancelled due to impatient fans.

On February 23, ENA Day 2022, a Twitch stream featuring the ENA team was streamed, discussing Dream BBQ.[18] During the stream, some concept art previously exclusive to Patreon members was shown and some aspects involving Dream BBQ were revealed and discussed:

On April 15, a short animation was shown for a character named Coral Glasses that would appear in the game.[20] The character reuses an older design made in 2020.[21]

On May 12, artist and animator Marco Cárdenas announced they were working with the ENA team as an animator for Dream BBQ, most likely for 2D character animation.[22] Eight days later, new concept art of Taski Maiden was shown which depicted her carrying her companions in an aguayo.[23] On May 31, a GIF of Ena talking while moving in a dance-like manner was posted by Joel Guerra.[24]

Early designs of the new Ena. Revealed during the ENA Day 2022 Twitch stream. 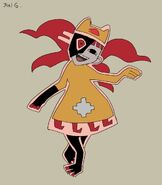 The character Taski Maiden, set to appear in Dream BBQ. 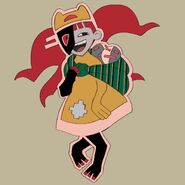 Another concept artwork of Taski Maiden, this time carrying her companions in an aguayo.

Concept art of a character nicknamed "Clown" before release. Revealed during the ENA Day 2022 Twitch stream.

Concept art of Ena and "Clown". 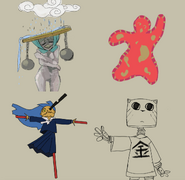 Another unnamed character. Revealed during the ENA Day 2022 Twitch stream.

What was originally a birthday gift from Brian Zavala to Joel Guerra[25] eventually became concept art for an area in the game. 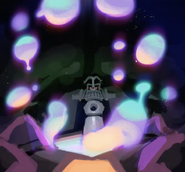 Concept art of a statue-like entity/structure. Revealed during the ENA Day 2022 Twitch stream.

Concept art of Ena and a dragon-like structure. Revealed during the ENA Day 2022 Twitch stream.

Concept art of Ena and a decorated room. Revealed during the ENA Day 2022 Twitch stream.