The Auctioneer is a minor character who appears in Auction Day. They are trying to sell the Hourglass Dog to a group of Headtombs, as well as Ena and Moony.

The Auctioneer takes the appearance of a puppet-like humanoid being. They are wearing black pants, a black hat, an off-white collared shirt, a red jacket, and a yellow tie. They have pure white eyes with swirls within them. They seem to be controlled by a blue and purple compact cassette tape-like object with faceted arms. When the cassette tape inserts its green striped proboscis into the back of the Auctioneer's head, it allows them to talk and move.

The Auctioneer appears to be a very excited and enthusiastic person. Their voice is fast-paced and exaggeratedly slick, like a stereotypical radio announcer, with frequent exclamations of "Sooie, Sooie!", usually at the end of sentences. 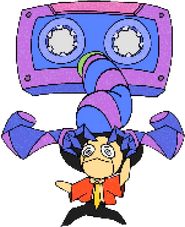 The Auctioneer selling the Hourglass Dog.

The Auctioneer saying their catchphrase: "SOOIEE~!"

Concept art of the Auctioneer and three Headtombs in the Auction Day credits.